This much storied and highly used waterway has an important place in Vermont history. The longest river in Vermont, Otter Creek flows north from southern Vermont through a number of bedrock transitions which, millions of years ago, created waterfalls. Before the widespread availability and use of fossil fuels, these waterfalls were invaluable as sites for hydropower, turning the mills that ground grain, milled lumber, and ran industrial plants such as forges.

Otter Creek is still a workhorse of a river, hosting several hydroelectric facilities and wastewater treatment plants. At its lower section of about seven miles below Vergennes, Otter Creek is at lake level, and then flows into Lake Champlain.

As rich as the soils were, early settlers in the Otter Valley learned that “you cultivate this bottomland but you don’t build on it.” Much of the Otter Valley is prone to flooding, spreading out into vast floodplains, alder swamps, and marshes during times of high water. For this reason, large sections of the Creek are relatively remote from buildings and highways, and some vast wetland complexes – such as Dead Creek Wildlife Management Area and Cornwall Swamp Wildlife Management Area – are valued for their wildlife.

The Otter and its tributary Dead Creek offer some of the finest pike, smallmouth bass, carp, and black crappie fishing in the state of Vermont. Many kinds of boats wind their way up from the lake to the falls in Vergennes: cabin cruisers, canoes, rowing pilot gigs, outboards, and sailboats.

“The Otter Creek valley was a paradise for Indians as there was an abundance of fish and game” once wrote Thomas E. Daniels of Orwell, a former state game warden. Native peoples arrived here between about 10,000 and 11,000 years ago to hunt and fish in a marshy landscape. Later, the Abenaki and Iroquois hunted, fished, gathered various herbs and fruits, grew crops, and settled in this abundant valley.

Called “The Indian Road” by early white settlers, Otter Creek was a long, easily navigated channel that offered access from Lake Champlain upriver to the headwaters of streams that flow east into the Connecticut River Valley and Massachusetts. During the French and Indian War, Otter Creek as well as Lake Champlain became frequently used war roads. Indians such as Algonquin Chief Grey Lock used the creek as an avenue to travel south to harass and capture English settlers, and then the colonists would in turn chase after them down Otter Creek to the north. In the 1700s, Chief Grey Lock would gather raiding parties at the mouth of Otter Creek on Lake Champlain, canoe all the way upstream into southern Vermont, and then walk over the mountains to raid settlements in Massachusetts.

Compared to other areas in Vermont, the Otter Creek Valley is very rich in the bedrock that was used by native tribes to make tools for hunting, trapping, fishing, and for processing plant products. In this valley Native Americans found highly useful outcroppings of chert and quartzite. Evidence shows that hard-working, knowledgeable native people developed a systematic quarry industry here. It appears that blocks of ore were removed from the bedrock, impurities and low grade ore were knocked off, and then the ore was flaked and ground down into axes, knives, arrowheads, spearheads, and many other tools.

The creek was used for both peaceful and hostile purposes. Evidence uncovered in archaeological digs in the Otter Valley reveal that for hundreds, even thousands of years, the creek served as a link in a vast network of Native American trade routes sending goods all over the Northeast and beyond.

As the word got out in lower New York and New England that the Otter Valley and the Champlain Valley were fertile, productive places, settlers migrated here. Communities sprung up at the more powerful falls along Otter Creek at Rutland, Brandon, Middlebury, and Vergennes. The soils in the valley produced corn, rye, oats, barley, wheat, peas, beans, hemp and flax.

In the 1700s and 1800s, men dammed Otter Creek at nearly every location where its water flowed swiftly. During that era, water power was king – it was necessary for almost all the settlers’ activities including milling grain, sawing wood, forging iron, and making cloth. Mills were located at waterfalls, where water tumbled down forcefully and was able to turn the large waterwheels that powered the mills. Hydropower dams were built and often later rebuilt at Center Rutland, Proctor, Brandon, Middlebury, Weybridge, and Vergennes. 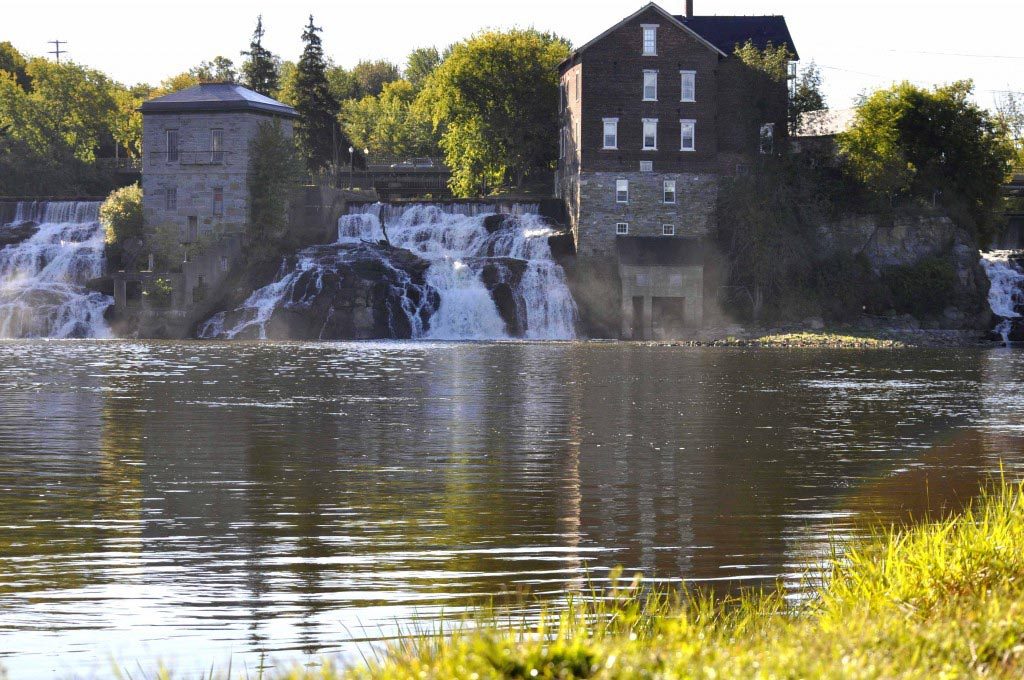 Otter Creek below the Vergennes Falls. Photo by Matt Witten

Most of these dam sites were buzzing hubs of activity. The falls at Vergennes, where factories were set up on the both sides of the dam and downstream, were especially rampant with industry. The first sawmill was erected in 1764 and soon other mills sprung up. The Vergennes waterfalls soon became an area of dispute between New York and Vermont interests, with Ethan Allen in the thick of it. After the Revolutionary War, mill construction at the falls increased rapidly, one of which was the Monkton Ironworks, later replaced by the National Horse Nail Company. By the early 1800s, Vergennes had one of the most developed iron industries in the region. This is one of the reasons that Lt. Thomas McDonough built in 1814 the largest vessels in his fleet of ships just below the Vergennes falls.

River Watch has been monitoring water quality in the lower Otter Creek since 1992. The longest river in Vermont, Otter Creek has one of the most intact, wide floodplains in the state. The broad wetlands beside the creek helped lessen the massive floods of 2011, one sign of a healthy river. E.coli levels are high at and near the river’s mouth. An increased number of monitoring sites in the Otter Creek watershed are being evaluated in 2014-2015 during the period when a more intensive monitoring focus rotates back to the watershed.

Otter Creek is listed by the State of Vermont as impaired for swimming from the mouth of the Middlebury River down to the Weybridge Dam and, farther downstream, from the Vergennes Falls to Otter Creek’s mouth at Lake Champlain in Ferrisburgh. E. coli counts tend to exceed the Vermont State Standard downstream from Middlebury (sampling station OTR23) to the Route 17 Bridge (sampling station OTR13). Counts at other locations often exceed the standard, especially during periods of high runoff.

Turbidity levels in Otter Creek are generally well below the Vermont State Standard of 25 NTU, but approach or exceed the standard at Belden Falls (sampling station OTR21) during periods of high flow and runoff. Concentrations of phosphorus in Otter Creek generally mirror those of suspended sediment in the water measured as turbidity. The primary source of phosphorus is erosion, and the phosphorus load transported by the river can be very high during periods of high flow.

In 2014-2015, the Collaborative is sampling an increased number of monitoring sites along the Otter Creek because a more intensive monitoring focus rotates back to the watershed during this two-year period.